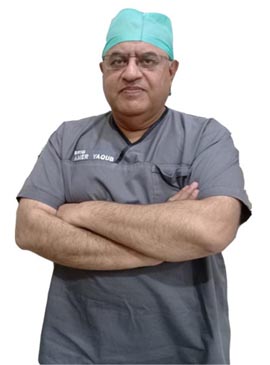 Brig(R). Prof. Dr. Muhammad Amer Yaqub is the best eye specialist in Rawalpindi Islamabad. After graduating in 1984 from Army Medical College as the Best Graduate he completed his Fellowship in Ophthalmology from CPSP in 1992 and from Royal College of Surgeons of Edinburgh in 1994. He then finished his fellowship in Oculoplastic , Refractive & Orbital surgery from Manchester Royal Eye Hospital in 1996.

Following his retirement from Pakistan Army, he is in private practice working as a Consultant Ophthalmic, Oculoplastic and Orbital Surgeon. He is an active supervisor for CPSP since 2002 and has supervised more than 20-30 trainees for FCPS in Ophthalmology so far. Dr. Amer Yaqub has also been an examiner for FCPS and MCPS since then. Since 2015, he is also examiner for Royal College of Surgeons Edinburgh.

He has taken an active part in the development of Oculoplastic as a subspecialty in CPSP and played a pivotal role in developing the curriculum for postgraduate training in this subject. Brig. Amer has been a past president of Pakistan Oculoplastic Association.

At present he is pursuing his interest in Refractive, Cataract and Oculoplastic as well as looking after general ophthalmic patients. He has extensive experience in dealing with posttraumatic eye injuries, and performs both complex and routine surgeries. Dr. Amer has special interest in Refractive, Cataract and minimally invasive surgery for orbital tumors.
He is an active researcher and has written a number of scientific papers in peer reviewed journals. Brig. (R). Prof. Dr. Muhammad Amer Yaqub takes keen interest in Medical research and Continuous Professional development. Brig. Amer Yaqub has conducted various seminars at national level and has collaborated with his colleagues nationally and internationally for holding symposia and workshops on different topics of Ophthalmology.